FlatPack Traps of Understanding calls for participants between 16 and 29 April- contact Alex on a.jackson.wyatt@gmail.com or  0404 950 291 to tell him when you can join him making traps and filming at Articulate project space, 497 Parramatta Road, Leichhardt NSW. 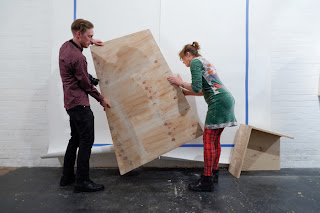 FlatPack Traps of Understanding is a cross-artform collaboration project and mentorship between emerging artist Alexander Jackson Wyatt and Filmmaker Christine Olsten (producer Rabbit-Proof Fence). This project will follow trajectories such as cinema, architecture and performance. The examination of fields such as cinema’s will look into its ability to ‘capture’ and frame space and spatial relationships.


Looking at architecture, the project interest lies in the building around a gallery's ‘encasement’, the empty space within a seemingly neutral context. The performative role teases out possibilities for the allowance of difference in the formal object / viewer relationships. Taking place during the final two weeks of April at Articulate Project Space, the goal is to document the procedure of the assemblage of a series of sculptural works throughout assisted by a group of amateur theatre performers (TBC).

Assembled by the performers, the artworks will become luring interactive objects and tools of deception (otherwise described as traps, design taken from those used to hunt wildlife), and all structures will use the interior). These will be attached to the gallery architecture, and thus forming a reliance on the building. For these two weeks, the gallery will become part 'film studio' to ensure the unfolding of the project is will be documented using photo, video and audio recording devices.

The Traps as individual units will not be malicious but stand in as question to the traditional role the gallery serves to both artist and viewer. Understanding the gallery as stable neutral environment, which is normally seen as an easily adjustable environment, allowing the work of artists to be accessed clearly, on both a visual and intellectual level. Like a hunter in the wilderness, this project aims to manipulate the gallery environment into to a kind of trap. Using the familiar enclosure to lure viewers, performers and filmmakers alike into a situation that seems familiar and intentionally neutral, but in turn is not what they could have expected. A camera will document how it unfolds.

This will produce footage for a documentary film highlighting the boundaries that separate the gallery environment from an 'exterior' uncontrollable environment, one that is separated only by a front door. The concept of trapping, in the case of this work, is seen as an attempt or device intended to control the often uncontrollable 'natural environment'.

The cross-art collaboration and mentorship aims to grasp the  'filmmaking process' as the best tool to track and visualise the artist's own response to this expected unexpectedness. This project will be reminiscent of works such as those of Bruce Nauman Space Under My Hand When I Write My Name, 1966 (Destroyed) and his other studio video works such as Walking in an Exaggerated Manner Around the Perimeter of a Square. Both of which pose questions around the relationship between a mythology of the artist's actions that result in the product of the artwork. It asks can the artwork become simply an engagement of the artist and their materials with space and time? Be it a body in space in the studio? In this case we are looking at the concept of the project space, in particular the Articulate project space. The question is posed similarly, but inverts the assumption of the final product as a stable object in a stable environment- and breaks down the interiority of the artist's studio and their actions.

Alexander Jackson Wyatt is the first of four young and emerging artists and musicians to be hosted by Articulate project space over the next year to develop mentored cross-artform projects.

This project has been assisted by the Australian Government through the Australia Council, its arts funding and advisory body.

Posted by Articulate project space at 15:23