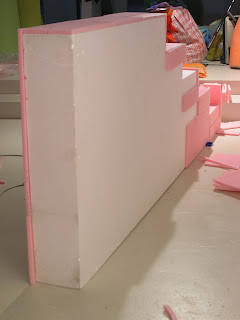 The project space project began last week with Lesley Giovanelli's project, Monochrome, which will open on 7 October at 6pm and be open 11-5pm until 9 October.

The project space project is a program curated by Sue Callanan and Margaret Roberts for Articulate project space. It aims to rejuvenate interest in project spaces as an exhibition practice that focuses on the thinking processes that go on in art making, and on the relationships that are formed between artworks and the places in which they are made.
It aims to do this is by inviting eight artists to each work in Articulate project space for a fortnight between now and early 2012, and to each open the space to the public on the last weekend, or at whatever stage suits what they are doing.  They might work on their own or in collaboration with others. They may produce finished work or work in progress. The plan is for someone to document the process as well as what is produced at the end.  This documentation may turn out to be as much an artwork as its subject.
Once the project is complete in a few months time, this documentation
will be sent to an international Art and Documentation festival to be held in Poland in April 2012. It is hoped to also be the basis of a forum or publication that discusses both project space practice and questions surrounding documentation of temporal and spatial art practices.
The eight artists who agreed to participate in the project space project are Lesley Giovanelli, Alan Schacher, Terry Hayes, Kathryn Ryan, Stephen Sullivan, Joan Grounds, Chantal Grech, and Adrian Hall, all artists who are either based in Sydney or have been until recently. The program as it stands now is provided on the right.
Progress reports will appear here as the program unfolds.