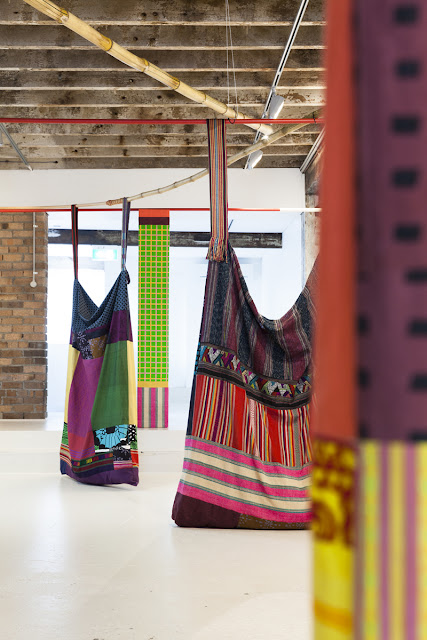 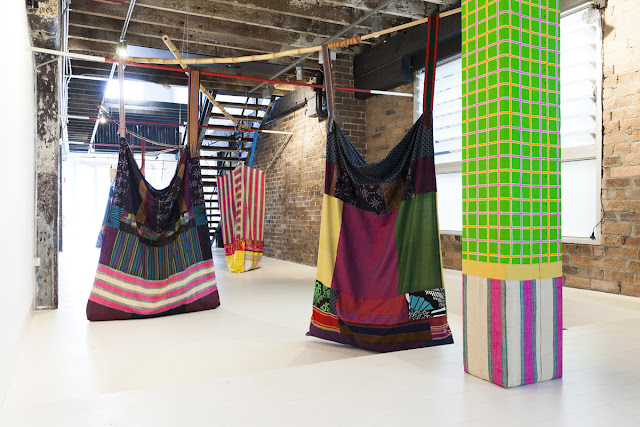 They definitely relate to the body, when you stand in front of them. But I was actually wanting to make a three dimensional shape but when I arranged the fabrics, then took them off the wall, they were much thinner. They weren't as full as I expected. Then when I started hanging them, they took on their own dimension—they became what they are because they sort of had their own life.

How did you put the patterns together?

I took days and days and days, being like a painter. I had polystyrene on the wall and pinned fabric on walls in squares till I found something. They ended up  being arranged on a horizontal and vertical grid. But I started with this piece here, it was just on the floor and I saw that that yellow is working with that extraordinary bit of hot pink because it had yellow in it, and then I looked around and found something with that pink in it, and realised I had this strong horizontal and vertical and horizontal bands . . . and a couple became asymmetrical . . .

But these have become something else. You stop reading them like that. If you put them back on the wall, with that strong hard edge arrangement, they are like paintings.  I would be very bored doing a hard edge painting. It's more interesting when it comes off the wall.  . . .

Rauschenberg has done so much - pieces with panels on the wall, then he has projected some out with a bamboo stick like a flag coming out from the wall.  He made big on the wall assemblages, like that horizontal piece, and he got that from Samarkand , then he combined them with printed fabric that he had printed. Then he made a big rectangle out of them so that they would become paintings. And it's because he put bought fabric against the printed things that made it interesting as a wall piece.

It looks casual. Joyfully put together. . . Where did these fabrics come from?

I have bought these fabrics from other people who have woven them. They were very happy to sell them. They come from a traditional background but these are not their sacred, special, religious items. These are pieces they very willingly parted from, and which they can repeat. I do not feel like that is very different from the person who is employed by Marimekko to design these fabrics  you see here, that then get mass produced. I bought that plain colour there in Bali, though I have never seen anyone use anything plain in Bali. This piece here is woven by tribal women in South of Yunnan in China and they were thrilled to sell it to me.  That is my fun part. You go to their village and say oh I like what you are wearing, and they bring all their stuff and we start bargaining. I went to Yunan at the beginning of this year. They are pleased to sell it. It's a big economy for them.

So all this fabric is bought by you overseas?

Not all, but a lot came from my purchases in Asia. [walking around the installation] The plain colours came from the shops and markets in Bali. I also got some very nice pieces in Bali that I bought from the makers. And some old pieces like this piece here - it was sitting in the back of a shop in a cupboard in Laos. I don't know who would have made it. This piece I bought from the markets in the north east of Laos.  I had to buy something from everybody, they were so insistent. Six women. This piece here was sitting in a shop, it's very old and looks like linen, and is all hand embroidered. That's classic. This piece I bought in the markets in the north of India. It would be hand embroidered. This piece I bought in the markets in Laos and it is probably hand woven. This comes from the north of Pakistan and that was bought here in Afghan Interiors and the man who runs that place closed it because they cannot make enough money here in Sydney. They support workshops there in the Hindu Kush and he said its synthetic fabric, but it looks handwoven. It looks like it's made for mattresses, or to cover cushions and things. A bit of old Marimekko shirt here, that I chopped up. This is stuff from Spotlight. A bit of a sari from a market in India.  More Spotlight. Chinese fabric from Spotlight. This was a scarf Chantal gave me many years ago. That was a Marimekko jacket or shirt of mine. That was the Italian jerkin my dad bought for my mum in the 1960s. More Marimekko. That is from a Chinese village. That is an old apron from the Tibetans in Nepal. The blue there is from Spotlight. This is from the shop in Annandale that sells quilting fabric. This is another piece of embroidery from Laos. That's a Japanese mass produced material with a traditional pattern from the Annandale shop. That's another piece of Marimekko, and that's another piece of Laos embroidery. I bought this here in Sydney, I dont know where it's come from. That's a bit of Japanese obi sash for your waist. And that's a bit of fabric from Bali that the men wear. So it comes from everywhere. This is a turban the lady from the Yao people was wearing, she would have embroidered this. This is very fine embroidery, and the women in the next village, which is Akha would have dyed it in indigo, and after I bought it from her she would have ordered some more fabric from the Akha women, and she would have embroidered herself another turban. She was wearing this one. I haven't washed it. So that turban is going all the way up the pillar. And I just had this other piece that Eva's dad brought back from the hill tribes somewhere, that is hand embroidered again.  And that's an Indonesian batik. So really I would say that probably about a third of it is fabric that I have bought directly in my travels and the rest of it has come from here. Including that one on the column here that is from Sarah's mother's couch, that she had left over. . . .

Posted by Articulate project space at 15:44