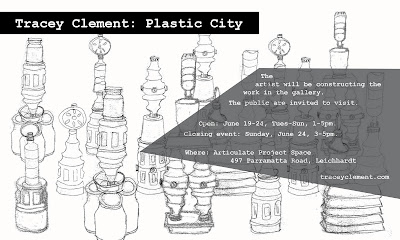 Plastic City represents the annual consumption of one individual. The miniature buildings are made from every plastic container Clement bought during 2010; they were stored instead of recycled.

The vaguely sci-fi style of the mini city’s ‘architecture’ is an invitation to think about the future. Plastic City embodies a number of timely questions about the types of cities we want to live in, sustainable practice in urban environments and personal responsibility. Visitors should leave asking themselves, “How big would my Plastic City be?” In this case, bigger isn’t better.

About the Artist: Tracey Clement is an artist and writer. She has exhibited widely in Australia as well as NZ, the UK and the USA. Plastic City is her sixth solo show in Sydney. She has a Diploma in Jewellery Design, a Bachelor Degree in Art History-Theory and a Masters degree in Sculpture. Clement’s work is held in both private and public collections, including the Smithsonian in Washington DC. She is the former editor of the Metro Art Page in the Sydney Morning Herald, and current editor/writer of the blog, The Post Post. Clement also contributes regularly to several magazines