FERAL is a progressive, overlapping exhibition program of over 60 artists that will be open Friday - Sunday 11-5pm between 9 January - 8 February 2015. Its five opening events are Fridays 9, 16, 23 + 30 January and 6 February at 6-8pm, each of which will show the work of a different combination of about twenty artists. FERAL is designed for artists to experiment with installation or location of artwork in an architectural space that is already altered by the earlier installation of other artists' work, and which will be altered again when another group replaces that earlier installation. The FERAL project is part of the broader Articulate interest in the relationships artworks form with their locations. It does this by focusing in particular on the contribution that the changing installations of artwork make to the constitution of a site.

Posted by Articulate project space at 08:22

A progressive and overlapping show in which groups of artists come and go, overlap and then replace each other in a series of generational occupations of this unique architectural space on Parramatta Rd in Leichardt. One of the curatorial ideas brought out in the show is encapsulated in its whimsical titling – it is ‘feral’ as it arises out of a similarity in pronunciation with ‘fair isle’ – a type of cosy Scottish knitting (and the title of the 2014 show). So, like a wolf in a hand knitted vest, many of the artists interrogate the tension between a transgressive or surprising element clothed within a familiar domesticity, resulting in works that meld these dualistic Feral/Fair Isle tendencies, using a wide range of media and spatial approaches.

Starting in the middle with FERAL 3. At last Friday’s opening night a crowd had spilled onto the pavement, but pushing in through the heat and crowd runs you right in to a confrontation with Veronica Habib’s work, I Love What You Have Done With Your Hair consisting of suspended female underwear. In a reversal of expectation, the lingerie wears hair – long, strands of unruly human hair – emerging from places on the female body it is usually banished from social sight. It is an elegant statement that raises issues of social expectation, hygiene, taboo and conformity, underlied by a sense of wry fragility and humour. Veronica talked about adding more hair as the show progressed. A keen sense of ironic commentary also underpins a second work in the show, Doubling in which Veronica Habib is used as a pseudonym by another artist, Melissa Maree. Circular holes are carefully cut out from two ‘doubled’ McDonalds-issued work shirts and the cutout circle forms appear, confetti-like on the floor beneath. The circle as symbol of repetition and routine suggests the serial monotony of menial work. Mel explains, “the cutting of the uniforms served to create holes to acknowledge the space outside of the uniform”.[i]

Undulating on the floor beyond is Sue Callanan’s work, In the space of a breath: device for circulating air. This piece is activated by its occupation as performance by the artist during Friday opening nights. The ducting is, again, a familiar form whose function is transformed. Insinuating herself within the confined ducting, Sue’s body movements within cause the green, shiny form to pulse and undulate in a slow organic dance that is quite mesmerising – particularly when viewed from above. The moving form evokes the interactions of human activity within built space.

Nicole Ellis’ works, Soft Pole and Night Work, call to mind the effect of abstract geometric paintings. A black square on a white wall, a series of vertical poles, spilling forms of saturated colour and geometric pattern. There is no flatness here though. The materials anchor her work in the contemporary – meticulously arrayed yet familiar from the supermarket aisle, these fabric strips atop wooden poles poised in equilibrium against a wall could reference microfibre mops and a potential analogy for action painting.

Marta Ferracin exhibited in the Feral 2 show, and her works also have this quality, of enshrining the domestic. In Domestic totem brightly coloured scouring pads placed on white gallery walls are reconfigured three-dimensional paintings. In a keen attentiveness to the space of the gallery site they are also seen between stair treads, curiously animating the physical flow of the show as well as the space of the site. In another engagement the scourer pads take on the energy of animated character vigorously engaging with another artist’s work.

This leads to another element to the exhibition – its call for experimental responsiveness to site as well as toward other participants. 497 Parramatta Rd Leichardt had a previous life as a smash repair workshop. Within the gridded trusses, exposed beams and elongated ex-mechanic’s space artworks nestle, hang, project and declare themselves in relation to the structurally defined interior.

Helen L Sturgess has a suspended work consisting of cascading flesh pink tulle, which utilises the verticality of the double storey drop to dramatically insert this delicate, feminine fabric and its distinctly bridal connotations into the brutal brick and concrete gallery space.  The material contrasts between pink tulle, Mel’s holey McDonalds shirts, and Nicole’s re-contextualized striped fabric also allude to a feminist dialogue activating the multiple and loaded meanings of materials.

The colour blue as a saturated screen-blue, derived by digital projection rather than pigment is an ephemeral yet the memorable aspect of Jannah Quill’s work, Virtual Bricks: Amplification of a Blue Space x 4. Its blue rectangular virtual form hovers just above floor level, close to the tangle of wires that feed it. Jannah talked about choosing this low position deliberately as it is at once a frustration of the traditional hang as well as an emphasis on its connections.

Glimpsed from below Julian Woods’ video work, Spirit: Life through Breath is fragmented by the triangular interstices of the exposed roof trusses. The slow, rhythmic expansion and contraction of the black and white balloon-like image is timed to the exhalation of our own breath in a curious episode of self-awareness of oneself as a viewer in the state of viewing. Bianca Burns’ abstract painting Spatial Study No.2 includes a tilted plane which projects into the gallery space however the placement of the work with its restrained palette within the site enables a new space to be activated in which architectural features echo the edge of the canvas and the painted linearity within.

Posted by Articulate project space at 21:00


Posted by Articulate project space at 19:31

MELISSA MAREE WRITES ABOUT THE DOUBLING IN FERAL 3

What is Doubling?
The Surrealist notion of 'Doubling' is a technique used to fracture and destabilize an object/image. The uncanny shudder felt from duplication also draws on a crisis of identity of divisions of the self (Unconscious/conscious and/or binary of reality/illusion).

A sense of humour is found in Veronica Habib's 'I Love What You Have Done With Your Hair, Underwear Brief, G-String and Dress' which strongly inspired the bridged link between 'Doubling'. After conversation and consideration of Habib's choice of materials and ideas (clothing/hair and warping of the familiar codes/perceptions of body image/sexuality), I saw a strong link in my manipulation of Mcdonalds Uniforms. The cutting of the uniforms served to create holes to acknowledge the space outside of the uniform – that is left open to audience interpretation.

Doubling uses the pseudonym of Veronica Habib to show the value of collaborative authorship and the importance of acknowledging fellow artists in process-based projects. This acknowledgement involves speaking with artists in process-based projects in a means of verbal and non-verbal language. After much discussion with Habib I asked her if I could use her name as alias.

The idea of assuming an alias came from the 'Doubling' of Helen L Sturgess and Helen M Sturgess, two artists with the exact same first and last name who were placed in Feral 3's project week. The blurry lines between who was who, I felt created a unintended collaborative authorship. Extending on this idea the pseudonym opens up discussion for collaborative authorship, and visibility and invisibility of the artist in an artwork.

The remains of the shirts also form a reference to Margaret Roberts 'Blps', where the leftovers form markers on the floor. Since 'Cutendpaste' a prior process-based show I participated in with Marg, I have been influenced by her spatial interests in merging abstract space with everyday familiar space. The abstraction of the everyday object (Maccas uniform) is an attempt to merge these two spaces, to draw on relationship between work practice and art practice. The instability of casualisation in the workplace is felt by many artists across broad spectrum of professions: hospitality, retail, and education. Doubling attempts to open questions on the impact of work relations on art practice, the holes acting as a point to see-through.

Posted by Articulate project space at 09:14

and closes at 5pm, Sunday 24 January, after which half these works will be removed and another 10 or so installed for FERAL4 which will open on Friday 30 January. 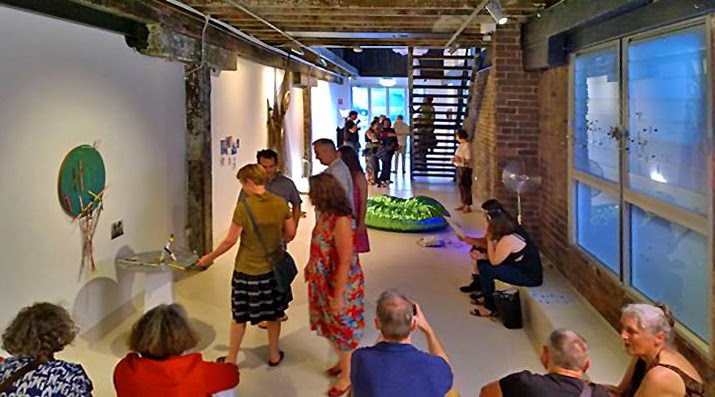 
FERAL is a progressive, overlapping exhibition program of over 60 artists that will be open Friday - Sunday 11-5pm between 9 January - 8 February 2015. Its five opening events are Fridays 9, 16, 23 + 30 January and 6 February at 6-8pm, each of which will show the work of a different combination of about twenty artists.

The FERAL project is part of the broader Articulate interest in the relationships artworks form with their locations. It does this by focusing in particular on the contribution that the changing installations of artwork make to the constitution of a site.

Posted by Articulate project space at 23:45