Artist's talk by John Gillies at 2pm on Sunday 1 October 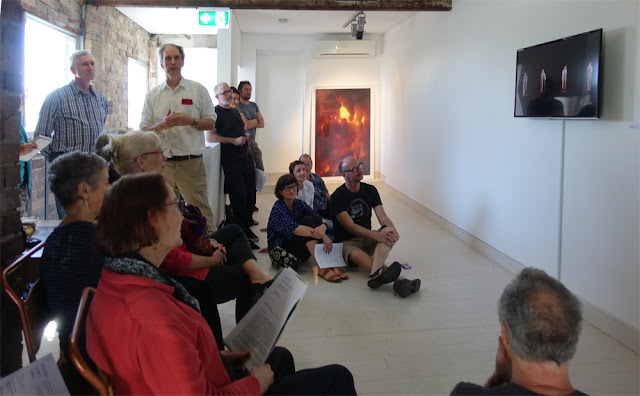 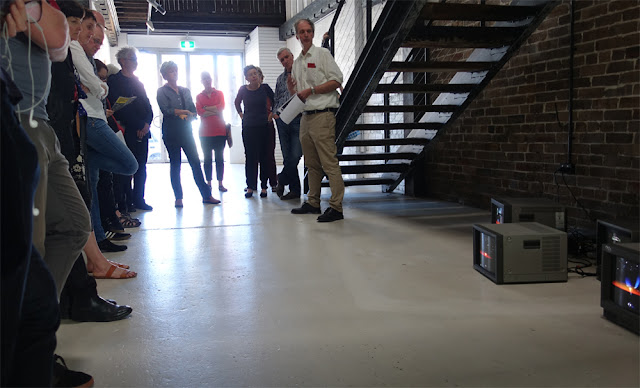 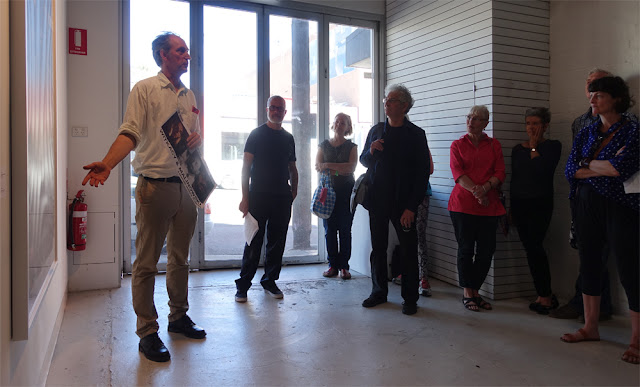 This project is supported by funding from the Inner West Council
Posted by Articulate project space at 15:54

You have lost the capacity to live. You are all of one piece.[i]

As I write, I keep a photograph of Stanisław Ignacy Witkiewicz, (nickname Witkacy) to the right of my page. It is there to remind me of the space between experience and account. In Fright (1931), the Polish playwright—add to this painter, novelist, philosopher, photographer, historiographer, art and cultural critic—appears unsettled. Witkacy embodies Fright with wide eyes; bottom lip gently curled downward, hands framing cheeks, fingers slightly blurred to imply the physical rigidity in attendance. He depicts the titular emotion with an air of exaggeration that was common to all of his representational forms. [If we can, for a moment, view Witkacy’s work with double vision, we might see a sight line that extends from Julia Margaret Cameron’s objective treatment of her subjects via calamitous allegorical tableaux, to the photographs of Annie Leibovitz, who houses her obsession with the archetype in the stretchy celebrity body.[1] This sight line comprehends those artists who pursue the nature of being as subject, only because it pays the greatest returns]. And so it is that Fright’s naivety, the way in which it privileges the emotional over the figurative in pursuit of representation, is central to its affect.  As a seized portrait of indignity and humiliation it is—necessarily—too much.

As a man, Witkacy was taut, intense, always on. Thus uneasy, we can understand Witkacy as forever working in the mirror, persistently re-arranging/deranging himself in front of whatever landscape happened to be returned by the glass. There are many biographical details, too convenient to overlook here, that point to Witkacy’s pursuit of the ontological and define his technique as one of assemblage: his portraits and self-portraits depict the subject in motion or in multiple, his nickname is a portmanteau of his middle and last names, he had an unsteady style and took to dressing in varied costumes, lurid jumpers, robes, and berets and–finally–when the Polish Ministry of Culture exhumed his remains and moved his grave to a new site in 1994, genetic testing on the bones concluded that they belonged not to Witkacy, but to an unidentified young woman.[ii]  If it were not for the corroboration of witnesses and the indelible proof he left of his existence via his archive, we might have cast Witkacy as a harmless, yet grotesque, chimera.

For John Gillies, assemblage is also a critical method. As an artist, his propensity to move between things—video, performance, sound, music, film, theatre, photography and installation—in order to embrace the contradictions of life and representation, might be the reason he was drawn to take on the scattered Witkacy as a subject [Witkacy & Malinowski: a cinematic séance in 23 scenes (2015 - 2017)]. If Witkacy could be proposed as a model for Gillies’ practice—as I am attempting to do here—then we might find some measure of the necessary distance Gillies has traveled between subjects, mediums and disciplines over his more than thirty year career.
In Gillies’ work, the difference between experience and account is mended by the act of citation—literary, theatrical, artistic and historical quotation are invoked to produce speculative narratives in which subjects speak into the gaps of their pasts. In the multi-channel video installation Parsifals (1987), the 12th Century tale of Parsifal’s quest for the Holy Grail fuses with Wagner’s 19th Century opera of the same name, via a number of surplus TVs on the floor. Wagner’s opera is audible, but only through a recording of it taken from a radio, in the midst of a thunderstorm. This aspect of the work feels particularly located in the rural—as the Australian bush is a place where other worlds arrive through bad reception and crackling static, or they don’t arrive at all. The Holy Grail offered those who unearthed it, complete self-realisation. In Gillies’ telling of it, The Holy Grail is found and the self is illuminated, albeit by the buzzing 4:3 of the CRT monitors; here commodities fatefully offer purchasable transcendence.
Actors are tasked with the incredible directive of “being present”. Witkacy wrote that, "people are ghosts pretending to be people." Like Witkacy, Gillies notices artifice and adopts it as a formal language in an attempt to faithfully render the discontinuities of the self and consider the nature of a fractured reality.[2] In Techno/Dumb/Show (1991), made in collaboration with The Sydney Front, Gillies began to pit melodrama against authentic representation. Sweaty, euphoric and pained faces fill the frame. Through spasmodic editing, bodies contort, repeat, contort and release; choreography and improvisation collide. The work eschews narrative in favour of “a festive catalogue of histrionic gestures”. Gillies’ Mise-en-scène, music and direction contribute to a spectacle in which performance - read presence - is compromised by ecstatic and ordinary emotional states, by “dislocation, pleasure, reverie and vertigo” [iii], by the act of losing, rather than finding, oneself.
[Witkacy’s] photographs from the 1920s and 1930s fall into two categories: metaphysical portraits and “Life Theatre”. The metaphysical portraits are psychological interpretations of the subject revealing the fragile sense of identity of self and consequently a heightened awareness of the mystery and horror of existence...On the other hand, the Life Theatre photographs are comical poses revealing life as adventure, play, a game, and infinite possibilities.[iv]
Video, film and performance, mediums to which Gillies most consistently returns, are premised on deception. Via illusion, they colonise inhabited realities, at the same time as they call into question themselves. Video, in particular, has the capacity to loop and repeat, making it a recursive and well suited to critiques of identity and histories—two thematic strains in Gillies’ own bodies of work. In Divide (2004/2016), a nation emerges from the collective memory of its introduced inhabitants. Incongruous things—an ant mound, a Chinese opera singer, men and animals—are cut to fit. The work is punctuated with these unlikely, yet familiar, amalgams. But if you have watched the Australian landscape from the window of a moving train [as you can so wonderfully in Witkacy & Malinowski...] or walked for absent miles through dense indifferent bush to find a beach at the end with a barbeque cemented on it or admired a purple shroud of Paterson’s Curse or looked past an outcrop of granite and serrated tussock to notice teams of sheep stepping their desire lines across deforested earth, then you already know that invasion here is not the exception, but the rule.
We are assembled through desire, accident, chance and mistake. If the future, as Gillies’ has stated, is in the act of being made from fragments of the past, then it is possible that the present doesn’t maintain a stratified position between these two positions but is, rather, a shifting state of infinite, dizzying progress and regression. Selfhood, like the Nation or the Landscape or the World, is best navigated when we understand it as a preliminary concept.

The image of Witkacy’s Fright has been replaced on my screen by pages of nascent notes, abandoned sentences, rich quotes and endless open tabs. The one has been splintered by the many. Experience, as Gillies’ work in the mirror demonstrates, is clouded by too faithful an account.


[1] “Cameron’s oscillation between aspiring to faithfully represent the external look of the subject and the treatment of a model as representation of symbolic form most certainly had an impact on Witkacy, who, like Cameron years earlier, connected the objective value of photography and the imagination of the photographer.” Lynn Warren, Encyclopedia of Twentieth-Century Photography, Routledge; 1 edition (November 15, 2005), 2005, 1695.
[2] “... editing expresses the contradiction of a seemingly unstable system that can be perceived as stable and ‘real.' It is not unsurprising that film montage appeared around the time Witkacy was writing in Einstein’s new theories. We accept it as a continuous reality even though it is made of discontinuities, similar to how our experience of reality is created.” John Gillies in Keith Gallasch, “Love, Materialism and Metaphysics”, RealTime, issue #136 Dec-Jan 2016.

This project is supported by funding from the Inner West Council
Posted by Articulate project space at 21:57

A new show by Australian artist John Gillies at Articulate project space presents new photo works  and a number of video works previously unseen in Sydney.  The exhibition shows different aspects of the broad scope and multi-disciplinary nature of his art practice.

Parsifals is a multi-channel video installation that ironically de-constructs and re-presents distorted fragments and images inspired by the story of Parsifal and Wagner’s opera of the same name, via a number of discarded television monitors on the floor. The television sets become the longed-for holy grail of the myth; the empty grails on the screens devoid of blood, but supported by a romantic mis-en-scene.

Collaboration is also present in his work with acclaimed performer Alan Schacher. Diasporic Body, is presented as a single channel split screen version. The work is based on a work presented by Schacher at the Da Dao Live Art Festival in Beijing.

This project is assisted by funding from the Inner West Council
Posted by Articulate project space at 18:11