Introversion is open from 11am Friday 3 July

Introversion is a group exhibition by Isobel Markus Dunworth, Kath Fries, Prudence Holloway, Fiona Kemp, Kenneth Lambert and Jacqui Mills, which reflects on processes of folding inwards during the COVID-19 crisis. Their videos, sculptures, paintings and installations each trace energy flows within interior worlds and engage with introverted patterns of psychological orientation. Turning one’s attention inwards has been almost unavoidable for many people during COVID-19 enforced social distancing; for some this self-isolation has been regenerative, but for others the compulsory alone-time has been challenging.

The artists in this exhibition would usually value alone-time and seek it out on residencies or in studios, insulated away from the world. For them the COVID-19 crisis period of isolation wasn’t necessarily positive or productive in that way, but it did open up some space for reflection and introspection.

Prior to the COVID-19 crisis these artists were all connected by their participation in the ‘Silence Awareness Existence’ residencies at Arteles Finland, 2012-2019. Drawn to the isolated, quiet and introverted elements of Finnish culture, winter countryside and the secluded nature of the residency; they were inspired to focus on and develop their individual introspective creative processes.

From these common threads of contemplation and quiet attentiveness, new conversations have grown whilst grappling with recent imposed isolation at home. These creative connections now come together opening up space for sharing with others recent experiences of folding inwards during the COVID-19 crisis.

Introversion is a collective response to the artists’ exploration of self, home, imagination and mindscape; letting go of the outside world, the city rat-race and extraverted social interactions. Through their shared exploration of alone-time, each reflects on their unique challenges of enforced social isolation and its impact on the inner psyche. Introversion shares their experiences of creative indoor plant cultivation, working patiently with layered textures and natural materials, mesmerising metallic painting processes, videos conjuring the elemental and notions of memory, and the meditative process of kneading and baking bread.

Because of the COVID-19 restrictions, there will be no opening event and we ask visitors to please observe the following
• ensure you keep 1.5m distance from others
• use hand sanitiser available
• a maximum of 35 people are allowed in Articulate under the 4sqm/person restriction.
• leave your name and contact number in case of contact-tracing

This project has been supported by funding from the Inner West Council through its 2020 Creative and Cultural Resilience Grants Program.
Posted by Articulate project space at 13:09

Open Friday 12 - Sunday 28 June
11am -5pm Friday to Sunday
This immersive installation uses fabric, texture and colour, expanding through space to incorporate the architecture. Inspired by the rich colour and lightness of an Indian sari, the installation creates the experience of walking inside a 3D painting with movement in every direction; above, below, across and around. 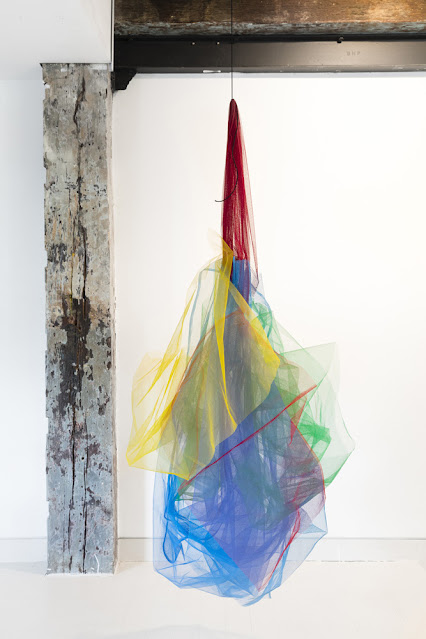 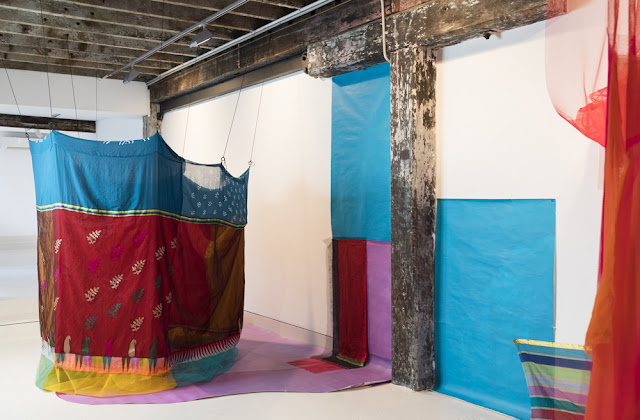 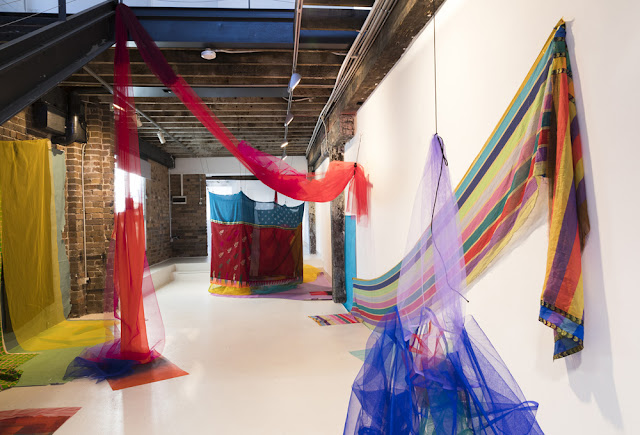 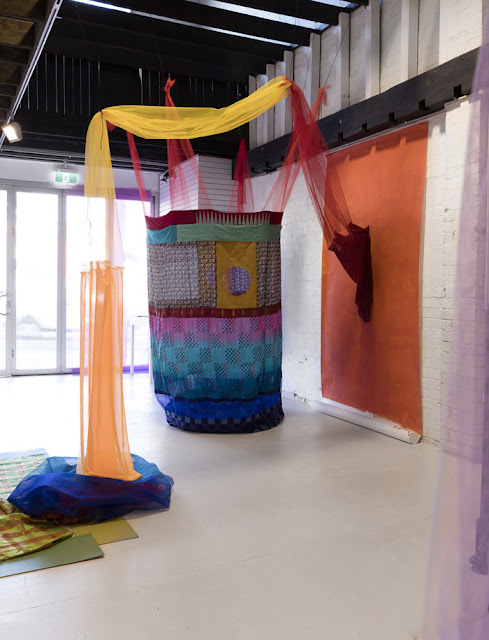 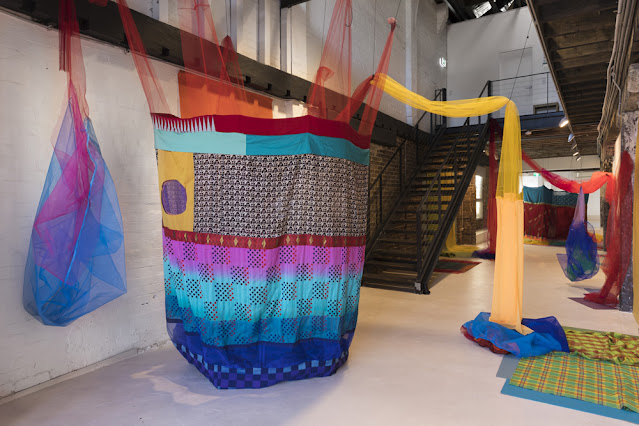 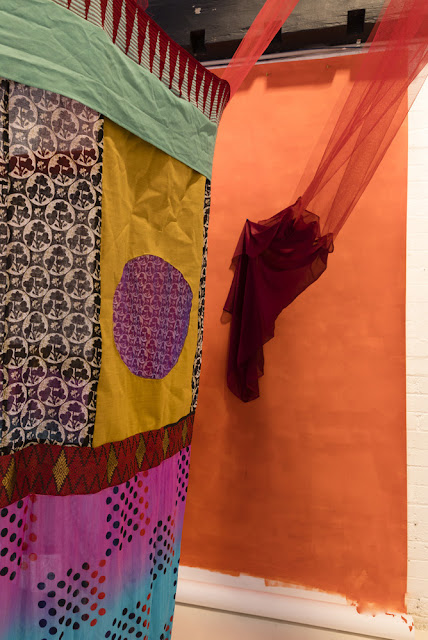 Tonight's Zoom - WHAT DO I SAY ABOUT THIS WORK NOW?

We had very interesting conversations tonight about the form of theatre that Voices of Women used in the Leichhardt Town Hall last year, and the challenges that variously restructured live spaces create for performers, actors and audiences.  Also about the theatre Nola Farman is enacting on #nolamayfarnam. We also talked about how our current use of Zoom is effecting our relationship to physical space, and how it sometimes effects relationships with people in surprising ways, perhaps because its shared live time might explain why it seems not as artificial or virtual as we might expect.

Please send your own reflection on a past work, either as text or as video or aural recording, or mixture, for posting on the Articulate blog, so that, once it is posted, the next zoom discussion can be arranged. Details of what to send are found here.
Posted by Articulate project space at 19:52

What Do I Say About this Work Now 3 - Zoom discussion

Please join discussion of the third reflection of What Do I Say About this Work Now? on Friday June 19 At 6pm

To prepare for the discussion of reflections on Voices of Women 2019 please :

• watch Voices of Women, The Monologue Adventure 2019 and
• read The staging of multiple voices in a shifting space by Clare Grant


Thinking about the performance of Voices of Women in 2019 at Leichhardt Town Hall: activating the space means rethinking about how we listen - where we gather - and why we come together to share story. What is a public space? What is an intimate one? Thinking about active listening of an audience, the craft of storytelling, and the spaces that can change and be transformed to accomodate that.

Understanding that an audience is never JUST listening, while accommodating the voices of multiple writers from diverse backgrounds. In the most obvious of setups, the reader would probably stand out in front of the audience, delivering the text in what is known as ‘front-on’ mode, like a lecture, or a sermon; a situation laden with associations of being ‘talked to’, or formally addressed.

Posted by Articulate project space at 13:21

Email ThisBlogThis!Share to TwitterShare to FacebookShare to Pinterest
Labels: Clare Grant, Lliane Clarke, Voices of Women, WHAT DO I SAY, ZOOM

WHAT DO I SAY ABOUT THIS WORK NOW? is an online project begun for the COVID-19 shut-down period. As new spatial artwork can not easily be shown during this period, this project instead encourages discussion of artworks that already exist. Artists are invited to reflect on one of their own works, including how and why its location is part of the work, for posting on this blog. Responses will also be posted here, and can be self-posted on Facebook and elsewhere. Here is the third reflection:


Lliane Clarke's reflection on her Voices of Women project at Leichhardt Town Hall in 2019 is available via the link below  and is supported by the following text by Clare Grant.

Thinking about the staging of the Voices of Women readings means thinking about maximising the staging possibilities for active listening for the audience, understanding that they are never JUST listening, while accommodating the voices of multiple writers. In the most obvious of setups, the reader would probably stand out in front of the audience, delivering the text in what is known as ‘front-on’ mode, like a lecture, or a sermon; a situation laden with associations of being ‘talked to’, or formally addressed.

This Bauhaus image clearly shows how the tiniest movement of a finger on a stage space can trigger exponential shifts in viewpoint for an audience; each line in the diagram impacts on each of the others. What happens, then, if you place the audience into this mix, ‘on the stage itself’, and ‘just’ read to them? The construction of the listening space becomes critical, so that the work and the listener are able to meet each other with as little distraction as possible – while never trying to persuade the listener that they are anywhere but in the actual building. They are on the real chairs, in real time. This ‘reading’ space becomes a kind of neutral space, open to the various ‘worlds’ being evoked by many writers’ imaginations and experience; a listening space that offers multiple ways to become immersed.

It’s a point of transition and exchange, with an extra layer if the writer is in the room too, in physical form, rather than just implied by the structure of the event itself. The reader/actor is also unquestionably present as themselves, while carrying into the space some of the characteristics of the figures of the story. It’s not strictly acting, because the writing is overtly being presented as itself, and the performer (usually) holds the script in her hands.

An early proponent of a staging plan that shaped a disrupted viewing, C20 Polish theatre director Jerzy Grotowski engaged in one of the earliest experiments in spatial relationships with the audience, freeing up the theatre space to be reimagined, and to activate the most resonant relationships between a writer and a space. Bringing multiple voices into play in the same space needs this break from more traditional arrangements of bodies in space, to absorb the range of voices without illustrating any of them.

Staging the ‘Voices’ readings to date: the first, in a long thin studio space, where, to be in a front-on arrangement would have left most of the audience with poor eyelines and a lack of physical proximity to the readers, the use of the ‘traverse’ setup allowed for a constantly shifting point of focus and a broad scope for actions by the performers. For the second, the ‘in the round’ setup in the vast space of the Leichhardt Town Hall also allowed for the audience to connect immediately with the performers, and, with only two rows of seats, the sense of ‘accountability’ of the audience members is slightly ramped up. The use of a floor rug and several standard lamps created a sense of intimacy, the domestic, thus a cosiness that the otherwise expansive space could have killed. The rug and the lamps were simply signals to the audience to relax and allow themselves to engage in the writing, while the lamps, not intending to create any kind of fictional ‘setting’, were simply a functional means of being able to see, while also achieving a ‘mood’ to help contain the audience’s focus.

The new challenge in of this project in Articulate project space ….. the ‘space’ for the third event, might have been inspired by the following set-up proposed, and designed, by Jerzy Grotowski.
All parts and angles of the multi-levelled space, with its multiple and variously-delineated areas will be drawn on, to amplify and, possibly, challenge the written voices and their stories. Grotowski enables a way of thinking about staging that releases the audience from the traditional proscenium arch, pointing to the multiple potential stagings for the Articulate readings program, albeit this time, challenged to ‘pivot’ still further into the filmic, the virtual; a possibility that would have been anathema to Grotowski, the most rigorous of believers in the power and importance of the body of the live performer.

Posted by Articulate project space at 11:59

Email ThisBlogThis!Share to TwitterShare to FacebookShare to Pinterest
Labels: Clare Grant, Lliane Clarke, Voices of Women, WHAT DO I SAY

Articulate re-opens with An Installation by Lesley Giovanelli

This immersive installation uses fabric, texture and colour, expanding through space to incorporate the architecture. Inspired by the rich colour and lightness of an Indian sari, the installation creates the experience of walking inside a 3D painting with movement in every direction; above, below, across and around.

Because of the COVID-19 restrictions, there will be no opening event and we ask visitors to please observe the following
• ensure you keep 1.5m distance from others
• use hand sanitiser available
• a maximum of 35 people are allowed in Articulate under the 4sqm/person restriction.
• leave your name and contact number in case of contact-tracing
Posted by Articulate project space at 10:55