Participate in It All Adds Up – Jody Graham

An elderly woman who I called Mrs Left fascinated me as a child. She was my next-door neighbour and lived with Mr Left. He couldn’t see very well and she used to help him drive, telling him when to stop and where to turn. Mrs Left had wardrobes of extravagant dress ups and a spiral staircase in the middle of her house. She showed me flowers in her garden and told me the fuchsia’s were like beautiful ballerinas. Mrs Left spent time with me, liked showing me things and took the time to sit and teach me to crochet. I was very young and this would have been a challenging task to take on. I never remember Mrs Left getting impatient or having a cross word. Mr and Mrs Left moved away, to a retirement or nursing home I assume. I was young when this happened and never had the opportunity to say how special it was to have an elderly neighbour provide the nurturing gift of time and patience. I felt safe and inspired.

It All Adds Up is a rug I am crocheting out of salvaged fragments of string, rope, twine, shoe laces and other bits of thread like material. I am doing this as a reaction against buying new and sourcing from what would usually be discarded instead. Believing the desire for more and new impoverishes the human spirit rather than enhancing it. Mending and using what is available lends itself to being resourceful, having far deeper satisfaction than the often-short lived joy that comes from spending and discarding the old. The whole concept of striving for new, more and better I believe is the cause of Affluenza. A social condition where individuals strive to be wealthy and success is determined by how much money you have. Seeking connection and esteem through purchases deprives us of the real pleasure that comes from connecting with another through spending time and resources.

You can also leave donations for this work on allocated pins next to the artwork during Articulate's opening hours 11am- 5pm Friday to Sunday or contact me on enquiries@jodygraham.com.au to participate in this project.

Posted by Articulate project space at 22:25 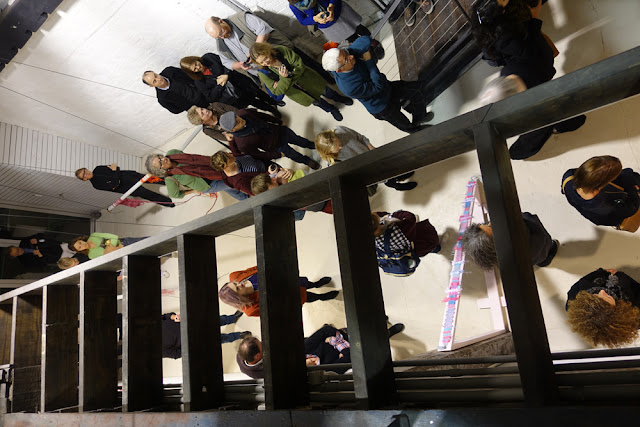 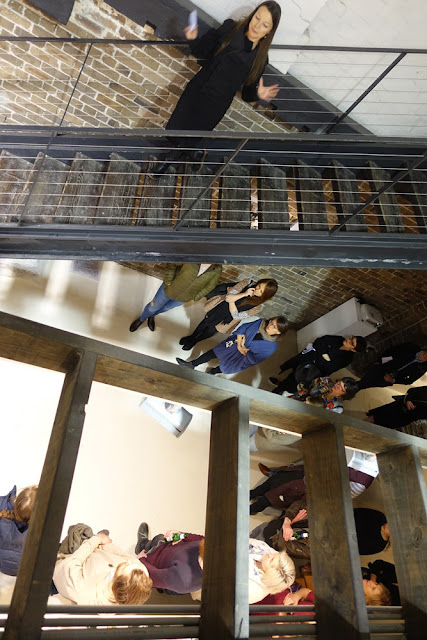 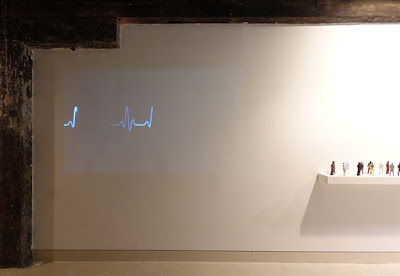 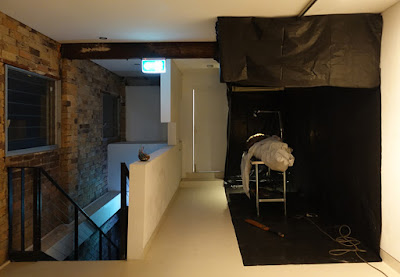 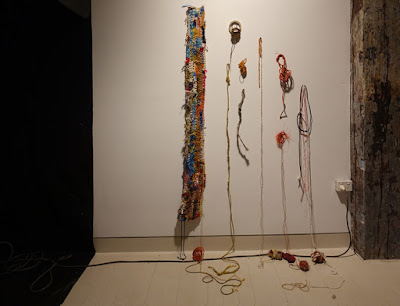 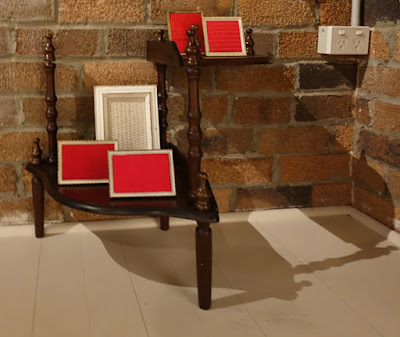 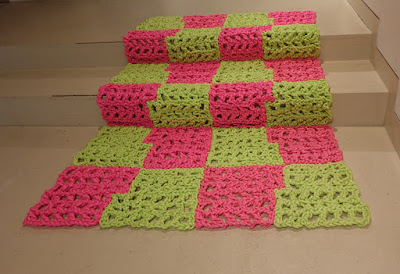 Posted by Articulate project space at 10:00


“Perhaps the key to the ontology of making is to be found in a length of twine.”(1)

The works in String Along are diverse and varied in form. But together they explore ‘line’ from its expression in the act of drawing, to knitting, weaving and to the filament extruded in 3D printing.  The process of making is also brought to the foreground in many of the exhibited works, as ‘lines’ create material traces that evidence their relationship with the body of the maker.

The ancient technique of making string is one of humanity's earliest innovations that led to the evolution of culture from fishing nets in agriculture to weaving looms in industry, which were the forerunners of the computers of today. Helen Amanatiadis’ works, A Measure of Strings and Probability of Miracles, explore the tensions between the inherently ancient practice of making and working with string and the rise of industrialisation and rationalism. Her works quote architectural building structures, braces or jigs, and are created from industrial strings of synthetic twine and rope, which are crocheted and woven into bands that cut into and across the gallery space. Amanatiadis’ works bring to the fore emergent activities such as making from string, which have been repressed through modernity and industrialisation.

Jody Graham’s works Missed Diagnosis, Urban Bowers and It All Adds Up address the accumulating detritus of the industrial world. Inspired by the use of found materials and the make do ethos that lay behind the creation of the ‘wagga rug’, which was thought to be created by Australian itinerant agricultural workers, from used wheat or jute flour bags and twine, during the late 1800s and early 1900s (2). Graham has collected and repurposed found string like materials into a life size cocoon and a series of nests that investigate metamorphosis and transformation. It All Adds Up is a collaborative work in progress, performed throughout the duration of the exhibition, which involves a rug being created from salvaged bits of string, rope, shoe laces, cord and fabric discarded on streets, in alleyways, parks and similar public places.

The evolution of the tools we make with informs the evolution of the way we think and the work of Marcelo Zavala-Baeza has developed through a micro interference with the processes of current technology. In Where is Gary? a series of miniature figurines appear to capture a moment of movement, an explosion of line that append the figurines bodies, a free expression of extruded filament from the otherwise controlled 3Dprinted description of the body – each have a unique character, expressed through aesthetics of the digital that he creates through a process that enhances chance encounters and happenings –and terms ‘serendipity”.

From micro to macro gestures, the collaborative performance work of conceptual artists Judy Ann Moule and Christine Wiltshier, Uncompleted Gestures Weigh Heavily…moves the notion of string towards thread and yarn. Using constructed and recycled materials (red thread and hair stuffed tubing) and suspended knitting tools Moule and Wiltshier consider notions of subjective and constructed identity, teasing out what is visible and what might be hidden, and, what might be shared, by each unique individual. As the props become activated, and the pair crosses over and attempt to interpret fading knitting instructions, the process of knitting becomes a gestural dance where the artists’ bodies and the process of knitting are integrated, suggesting knitting as part of identity.

The works of Cathy Ball and Tricia Flanagan also involve the reimagining of intimate artist experiences, through a combination of string as thread, yarn, technology and weaving. Ball’s work, Day 10 involves a transformative process described in red thread, which accounts for the time involved in treatment and recovery during illness. The meditative nature of the weaving process was used therapeutically during this time to create this series of small panels.

Yarn, weaving and intimate experience are combined with technology in Tricia Flanagan’s’ work BODYecology; in this case the time counted in her work is that of sleep. A video reveals a performance installation and is displayed in the exhibition along with a blanket. The blanket has been produced during the performance. The video shows the artist sleeping in a gallery beside a portable dying machine which records her sleep pattern in indigo along a hand spun thread. When Flanagan awakes she weaves the resulting variegated blue and white thread into a blanket, whose varying stripes document in cloth, a night’s sleep, this process was repeated for 1 month.

Posted by Articulate project space at 18:16

This project is supported by funding from the Inner West Council
Posted by Articulate project space at 18:14 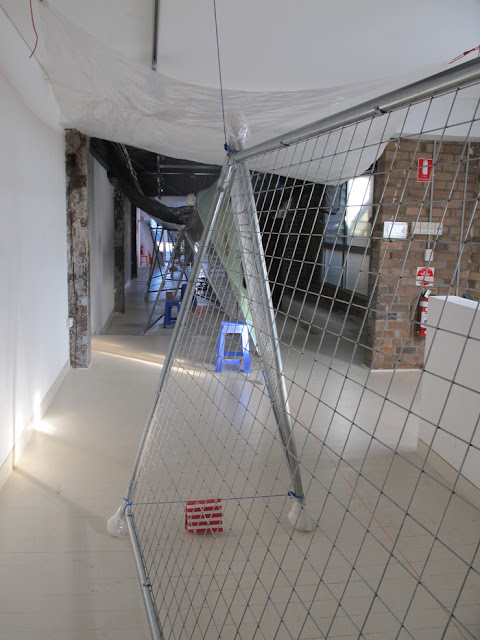 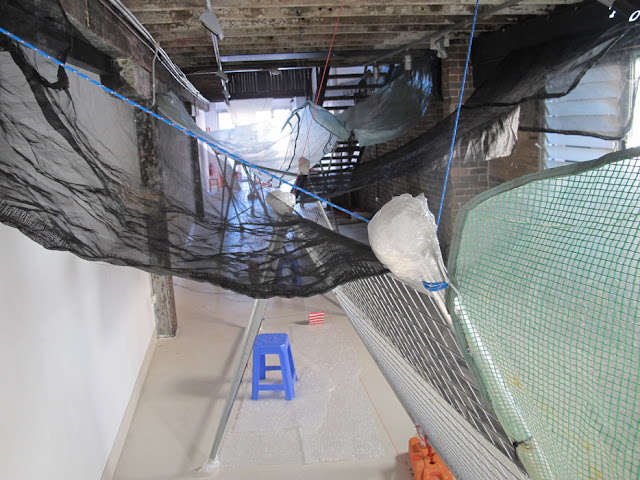 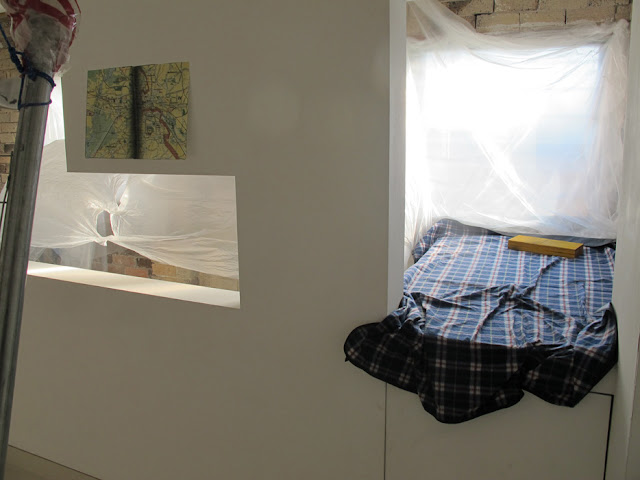 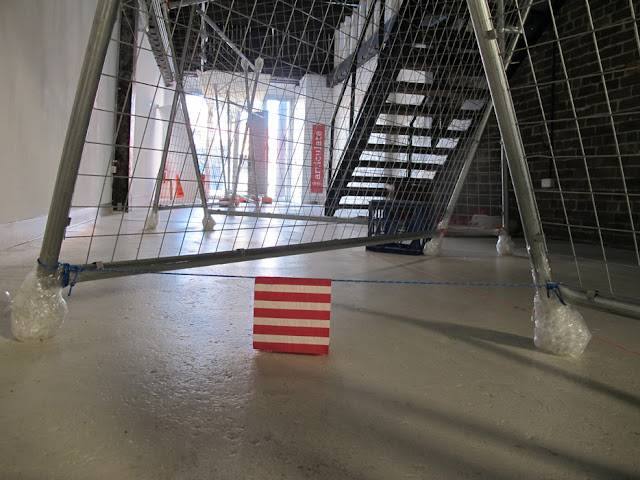 This project is supported by funding from the Inner West Council

Posted by Articulate project space at 14:27 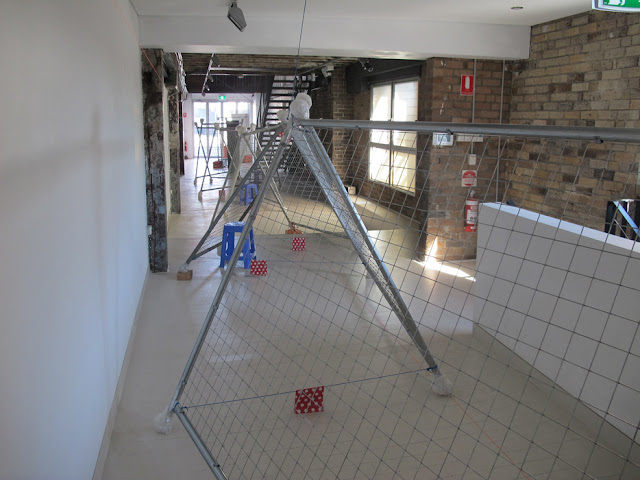 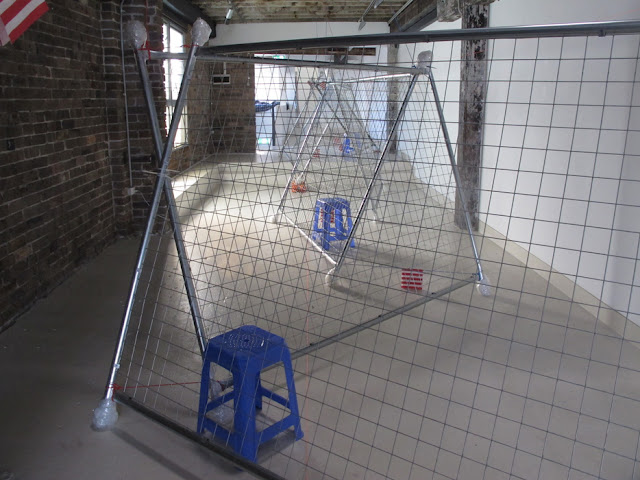 This project is supported by funding from the Inner West Council
Posted by Articulate project space at 17:15

The second and third weeks of Dividing/Line will have a different program. 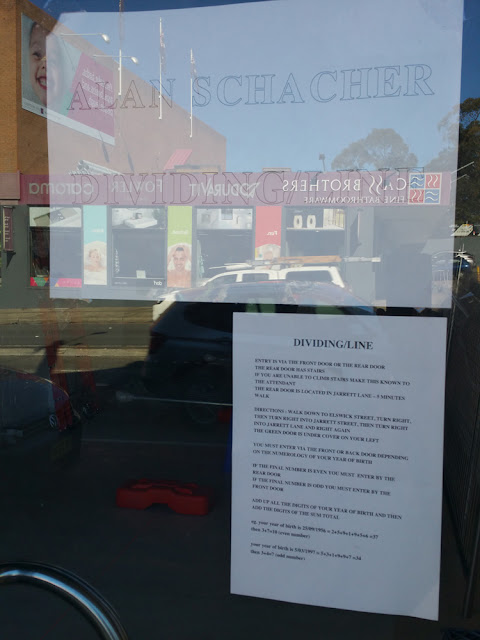 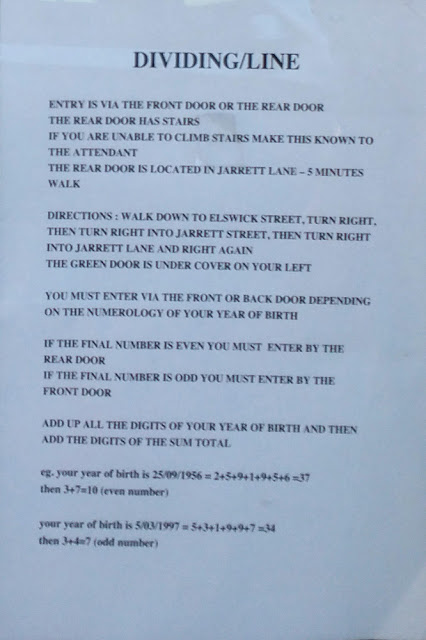 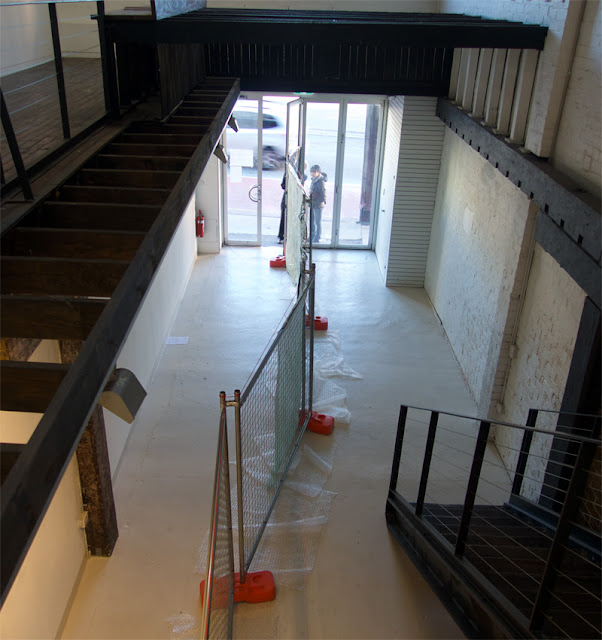 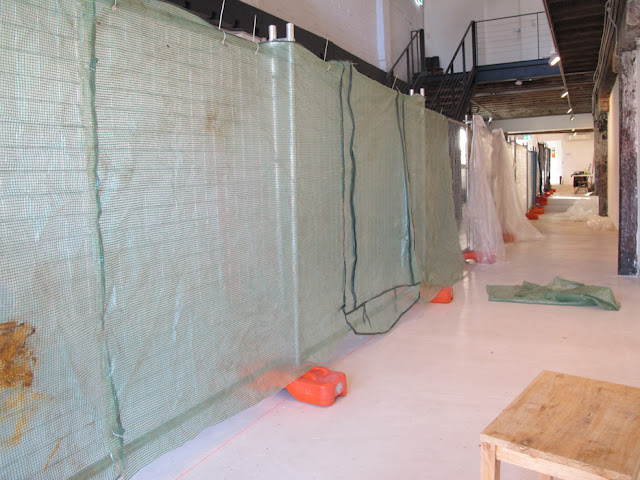 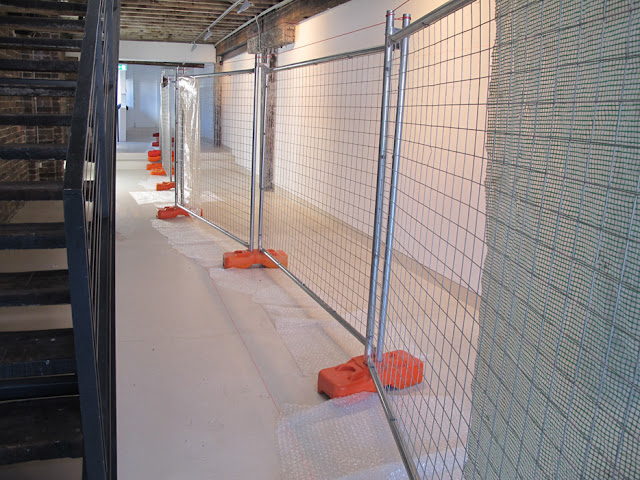 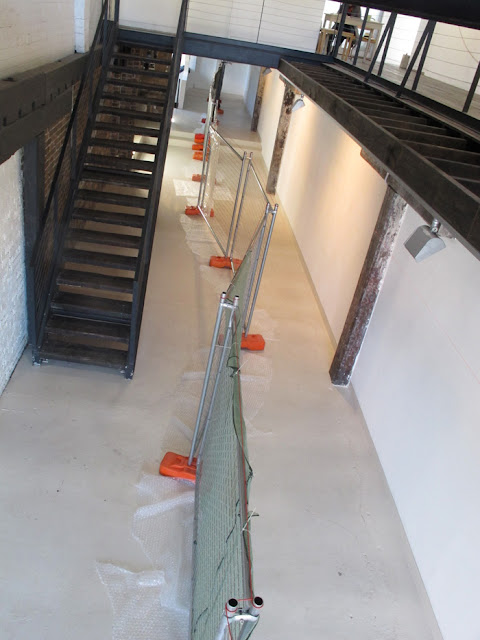 This project is supported by funding from the Inner West Council
Posted by Articulate project space at 20:18


In this project performance artist Alan Schacher sets up a ‘non-space’, intending it to be devoid any art-work or performance. He will construct a barrier wall using simple materials including those gleaned from neighbouring streets.  The thematic of lines, borders and boundaries is part of Schacher’s broader exploratory topic of diasporic experience. He takes this work into solo performances as the ‘diasporic body’ subject, and here at Articulate makes it societal, segregating an ‘audience’ who gather to witness.
What will be created is an apart-heid, an arbitrary division of participants.

This is a work based on the single space of 'the gallery' and in undermining its purpose. It has multiple conceptual precedents and influences, including reference to Chris Burden: Exposing the Foundations of the Museum 1967, Pierre Huyghe: After A Life Ahead, Skulptur Projekte Münster 2017, two works at the Biennale of Sydney 2018: Jacob Kirkegaard's Through the Wall at the Art Gallery of NSW (which replicated a section of the Israeli-Palestinian Wall), and Marco Fusinato'sConstellations at Carriageworks (which divided a large space with a huge wall).

Schacher's ensemble performances with Gravity Feed (1992-2004) often played with the performer/spectator contract of spatial enactment, and in his work Line of Fire 1994 he cut symbolically at an institution's foundation. His performance Sweet Separation 2017 is a tiny separation wall constructed with sugar cubes (to be repeated at Bundanon's Siteworks 2018).

Participants should book into one of 12 timeslots online as the event relies on bodies in the space.
This is Schacher’s 2nd residency at Articulate. In 2011 he created the series One Day Collaborations, in which he collaborated with a different artist each day.
How to attend:
Visiting times :
3-4pm  Fri, and Sun August 3rd and 5th,
4-5pm Saturday 4 August
3-4pm Thurs, Fri, Sat, Sun August 9th-12th,
3-4pm Thurs, Fri, Sat, Sun August 16th-19th

Following reservation you will receive instructions by email. Please ensure you leave an email address.  Please contact Alan on 0418 272 601 if any problems.

Dividing/Line is the second of Articulate's planned Changing Place program, which focuses on single, whole-space installation to emphasise relationships artists construct with location. Articulate plans to use its 2018-19 funding for this program to support and encourage experimental spatial practices, but in the absence of funding from Create NSW, Dividing/Line may be the last one for now.

This project is supported by funding from the Inner West Council

Posted by Articulate project space at 11:53