24 Oct - 6 Nov: Ben Denham, Terry Hayes and Robin Hungerford: I believe you have something to tell me


The interview began by the headmaster playing an old, useful trick that he used
nine times out of ten on such occasions. He began by saying nothing at first, he
held his eyes down, while his nose wrinkled beneath his slipping glasses as if
what he was reading on the desk before him was something unfit for decent
people to see. It gave the boy time to realise where he was, to be overcome by the
awkwardness of being there, and today, for him to take in the carefully arranged
evidence which sat like stage‐props in the room. The headmaster usually held
that position for a while, judging the moment to begin speaking. After nearly
twenty seconds he looked up from the desk and removed his reading glasses; he
stared piercingly at the boy; and he played his second trick. 'I believe you have
something to tell me', he said. It rarely failed. Only the hardest cases, or the most
innocent, could resist the implication that he knew everything, and he was just
giving them a chance to confess. And the boy was no exception. 'You mean about
the rat sir?'... 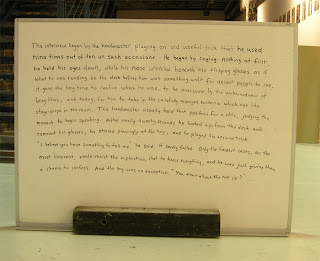 Posted by Articulate project space at 20:45

Email ThisBlogThis!Share to TwitterShare to FacebookShare to Pinterest
Labels: Ben Denham, I believe you have something to tell me, Robin hungerford, Terry Hayes, whole-space work
Newer Post Older Post Home