GAP is a group project-space event in Articulate project space in which seven  artists are each working in the whole of the project space for 17 - 30 September 2012. The artists are aiming in various degrees to engage with the whole space at the same time as sharing it with others, negotiating with each other when crossing over or working in the same place. It is called GAP because, as well as the artwork likely to be produced in the time, it is also intended to encourage a focus on accidental or deliberate disjunction and interaction between artists, artworks and architecture. 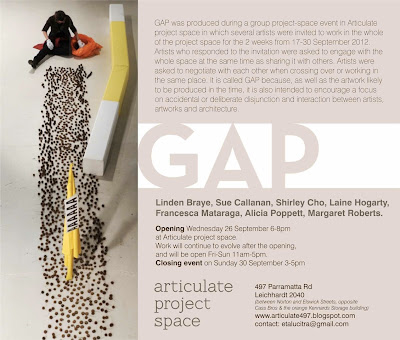 Posted by Articulate project space at 10:48