ARTLINK will launch 'MINING: gouging the country' on last day of LEAVE IT IN THE GROUND: Sunday 1 December

ARTLINK launch December 1, at 2-4pm at Articulate project space
LEAVE IT IN THE GROUND open Fri - Sun 11am - 5pm

Guest speakers at the launch are:
•  Dr Ann Finegan, writer-researcher and co-director of Cementa Contemporary Arts Festival located at Kandos, in a valley local to Bylong, the centre of the ongoing Eddie Obeid coal scandal, and
• Jo Holder, curator and founding Director of Cross Art Projects in Sydney, known for experimental, cross cultural and activist dialogues.

Artlink's issue 33#4 December 2013, Mining: gouging the country is edited by
Stephanie Britton and Professor Pat Hoffie and will be available at Articulate
project space. 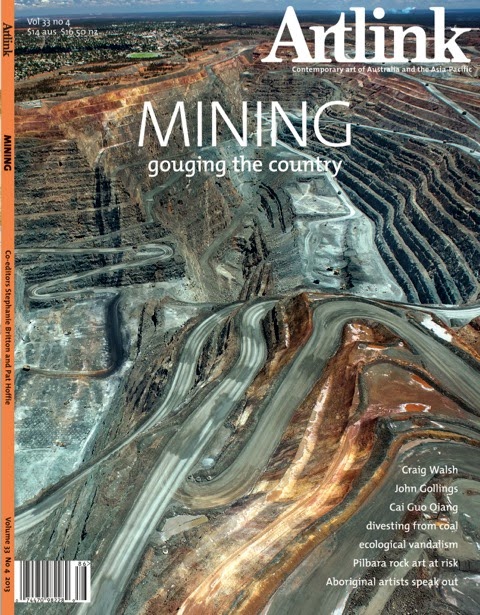 The world is hungry for minerals and fuel. Is Australia's preparedness to gouge its (sacred) earth any different to that of any other country? The land's value in spiritual as well as economic terms has led to some of the most debated legislation of contemporary times – from Australian Aboriginal ownership and land rights to mining, coal seam gas extraction, the value of the land; who owns it; who has the rights to use it; to sell it; to exploit it; to act as custodian of it. Initially defined as "Terra Nullius" this country is now recognised as an ancient, mineral-rich continent of hotly contested territories.

This issue digs deep into the seen and unseen impact of big mining and its greed for the rapid and ruthless exploitation of fossil fuels. It comes at a turning point for the community in relation to climate change. With the carbon level in the air now reaching 400 ppm, coal mining can never be ‘clean’ or sustainable; 350.org, an urgent global public campaign to keep coal in the ground is growing.
Artists, artists' alliances and arts writers join with environmentalists to raise consciousness about the dangers of mining operations on farmlands, rivers, in remote areas, deserts, and coastal areas, as well as in the depth of the oceans.
• Ken Mulvaney writes on the ancient rock art being damaged by proximity to mining operations on the Burrup Peninsula.
• The tension around funding for arts, science and community enterprise from mining companies which commonly exploit the prestige of arts projects to varnish their image. Arts patronage is used as a wedge to buy off the potential community opposition and the custodial burden is getting heavier for Indigenous land holders in many regions.
• During the mining boom has support to the arts from mining companies been minimal relative to their profits?
Artists include Fiona Hall, Cai Quo-Qiang, Craig Walsh, Jan Senbergs, John Gollings, Ah Xian, and Raymond Arnold.
Writers include Daniel Thomas, Sam Cook, David Hansen, Michael Taussig, Judith Blackall, and Jane Deeth.

Posted by Articulate project space at 07:53